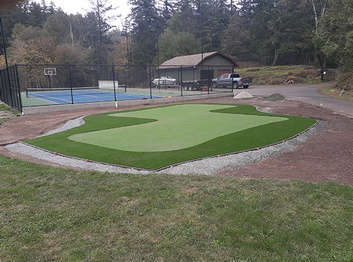 Royal Green Landscapes is a full service company offering landscape design and installations. The company originated in 2012 as a result of many years improving landscapes ranging from small to large acreages. The company’s founder, Brad Filmer completes most tasks from consultation and design through all phases of installation.

The company employs an eco-friendly approach to new landscape installations or renovating existing plots. A high emphasis is made to improve properties responsively and retain natural features whenever possible. Improvements are also achieved proactively taking into account all phases of development for new or existing grounds.

Water use has been drastically reduced or eliminated for attractive landscapes. Low volume sprinkler heads and drip irrigation is utilized where watering is necessary.

Brad Filmer was born and raised on Vancouver Island. His early work was maintaining Golf Courses to a high standard. During this time he gained a desire to enhance and maintain turf landscapes. His passion for improvement and knowledge led him to the University of Guelph in Guelph, Ontario.

He achieved a Degree in Horticulture in 1990 emphasizing in Turfgrass Management. Even before graduation, Brad was actively employed at the Fairwinds Golf Club in Nanoose Bay, BC and became the Assistant Golf Superintendent in the early 1990’s.

During this time, new golf course planning and development was booming. Brad landed the position of Superintendent at a new facility in Qualicum Beach, Pheasant Glen Golf Resort (formerly Glengarry Golf Links). After a swift construction phase and a successful year of operation, Brad moved on to build and develop Arrowsmith Golf Course north of Qualicum Beach, BC.

Since inception in 1996, Arrowsmith Golf and Country Club quickly became one of the best golf courses on Vancouver Island. Its reputation grew quickly as a superbly maintained facility for all players. During the next 15 years, Brad managed the golf course and facility to a high level consistently year around. He continued to improve the property while becoming one of the premier Turf Managers in BC.

The economic downturn in 2008 – 2009 rendered less golfers and declining revenues. Shortly thereafter, Brad decided to park the golf course business and expand his landscaping profession. Assisting homeowners with improving their properties was an easy transition. Brad has the reputation of being approachable and he enjoys working with people to reach common goals.